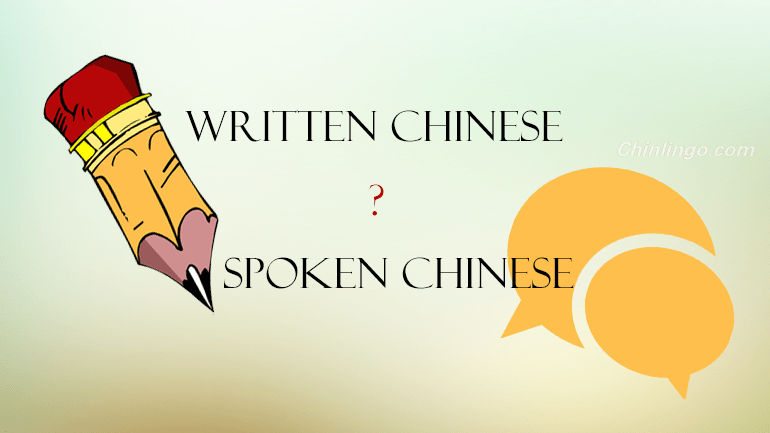 After months or years of studying Chinese, do you still find yourself confused about what Chinese people are really talking about among themselves or with you? If the answer is yes, then you should keep reading this article! The truth is there are some huge differences between spoken and written Chinese, which confuses lots of Mandarin learners, even Chinese people themselves! Let’s find out the reasons, shall we?

Before the early 20th century, written Chinese referred to ancient Classical Chinese, whereas the spoken Chinese language was completely different from the written form. During the 1910s-1930s, when China was beginning to modernize, there was an influential literary movement to use vernacular Chinese in place of classical Chinese in writing, because the former was easier to understand for the vast majority of people, who were learning how to write and read for the first time. Therefore it helped to increase the nation’s literacy. Then, an important question was raised: which language/dialect do we choose as the national official language since there were so many of them? After lots of debate, the Mandarin (Guanhua) dialect based in Beijing was chosen to be the standard form of written vernacular Chinese. Today this is simply referred to as Chinese or standard Chinese putong hua.

Then, why has this created confusion between spoken Chinese and written Chinese? Here’s the reason: a person living in Shanghai, for example, who only speaks Shanghainese, is generally able to write and read in a “written form” of Beijing Mandarin. However, he/she speaks with a particular grammatical structure and vocabulary but has to write and read in a completely different way. You can see how this makes things difficult for speakers of non-Mandarin dialects. Often, to make things easier, most non-Mandarin regions of China (Jiangsu, Zhejiang, Fujian, Guangdong, Guangxi etc.) have adopted non-standardized ways of putting their native vernacular languages into writing.

For the younger generation, regardless of whether they use local vocabulary in writing, they usually understand standard Chinese very well, since they learn it in school. So the mutual intelligibility goes one way. The non-Mandarin speakers can read Mandarin, but the Mandarin speakers usually cannot read local dialects.

Aside from the historical reasons for differences between spoken and written Chinese, deeper and more obvious reasons lie in the various kinds of dialects. Not only different pronunciation of different dialects, but also differences in vocabulary and grammar make it more difficult to understand the language. If you look at the following example, you will see that the difference between dialects is not simply that the same string of Chinese characters is pronounced differently according to the spoken dialect.

There are 55 ethnic minority groups living in China plus the dominant Han Chinese people. Ethnic minorities often have their own writing system and language, such as the Zang people, Miao people, Weiwuer people, etc. However, they are all required to learn standard Chinese (Mandarin), which makes China a complex and multilingual society.

Though this is not a surprising phenomenon, as it is seen in other places in the world, we can imagine how troublesome it can be for those Chinese people with another dialect or even language to learn their national language at school.